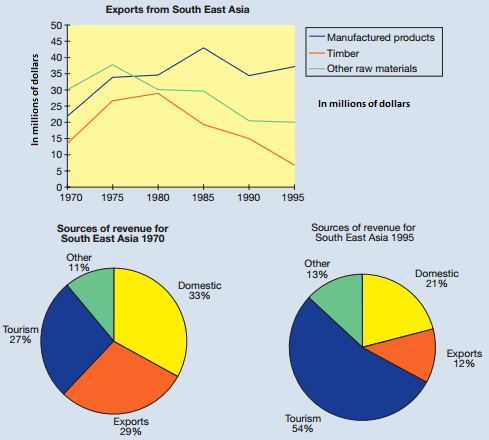 The graphs below show three exports from South East Asia and the four sources of revenue for 1970 and 1995.

The three graphs present changes in exports and revenue in South East Asia from 1970 to 1995.

The line graph shows three different exports, namely manufactured products, timber and other raw materials. From 1970 to 1975, these three exports rose, with timber increasing most dramatically by $20 million dollars. From 1980, both timber and other raw materials declined as exports fell from nearly one-third of all revenue to slightly more than one-tenth, a change which is also reflected in the pie charts.

Throughout the period presented, the largest increase in exports was from manufactured products and there was a significant increase in tourism, as the 1975 figure had doubled by 1995. However, this was accompanied by a decline of over one-third in domestic revenue. The remaining named source of income, classed as only a slight of 2% over the same period.

Overall, it can be observed that while timber and raw material exports fell, revenue from tourism markedly increased.