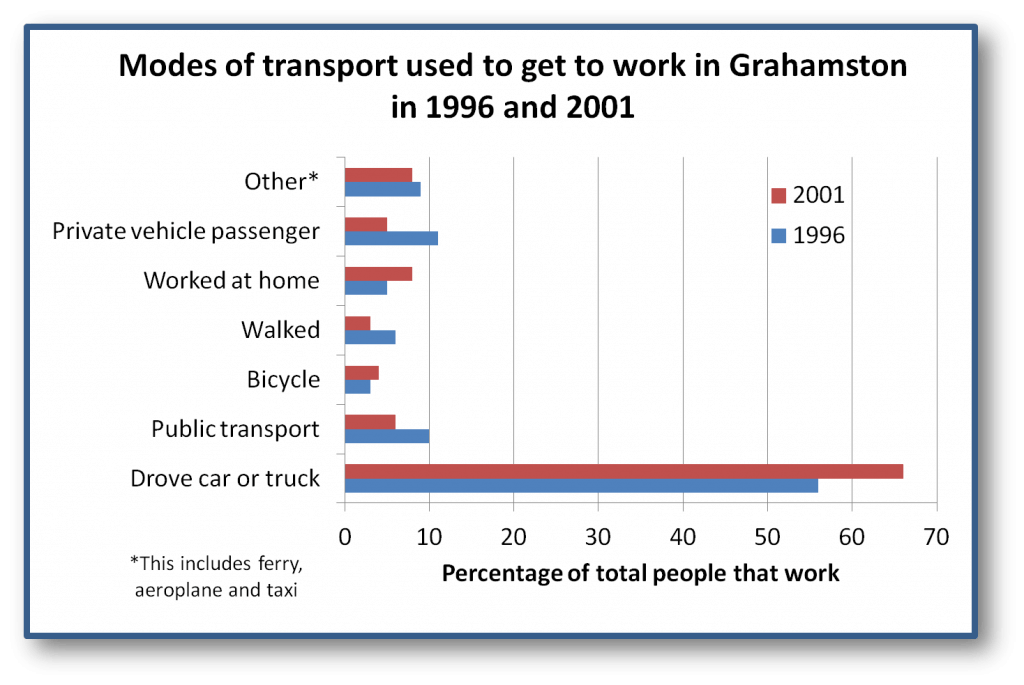 The chart below demonstrates how people used to travel to work in the year [delete this or use ‘the years’] 1996 and 2001 which was held [delete this – you only ‘hold’ something like an event, a festival etc.] in Grahamston. There are 7 mode [‘modes’] of transportation to be selected from: drove by car or truck, private vehicle passenger, walked, bicycle, public transport, other (which comprises taxi, ferry, aeroplanes) [avoid writing in this kind of ‘list’ format]. Favourite [we don’t know if it was the ‘favourite’, only that it was the most common. This should also have started a new paragraph] mode was by the use of the car or truck which got the highest [‘which was most used’ – ‘got the highest’ is too informal] more or less [this is too informal – change to something like ‘with approximately’] 77% in the year 2001. Still, we could see [‘it can be seen that’ is more academic] that in 1996, a little bit less [too informal ‘this was slightly lower’] which was 56% but still the highest in that year. Secondly, [A new paragraph should have been started here] there was a big [‘significant’] difference of 11% (private vehicle passenger) from the use of car or truck in the year 1996 and 2001. The rest were all 10% or less in both 1996 and 2001. In 1996, ‘other’ or public transport were a little bit the same [too informal – change to something like ‘comparatively similar with’] 9%, 10% respectively. While ‘walked’ or ‘walked at home’ are [‘were’] 6% and 5% respectively. ‘Bicycle’ was the least favorite in that time (1996).

One of the main issues here is the lack of paragraphing, but also there are a number of occasions where the vocabulary used is too informal. Also, throughout the report, the writer is very specific with the data (77%, 56% etc) where using a wider range of expressions would have been better. For example, 77% could be ‘just over three quarters of the total’. There are also significant errors with grammar and sentence construction.

On the positive side, the writer has covered the main points and striking trends, and some of the expressions used are academic.