The chart below shows the percentage of the population who lived in urban area in 2003 and an estimated figure for 2030. 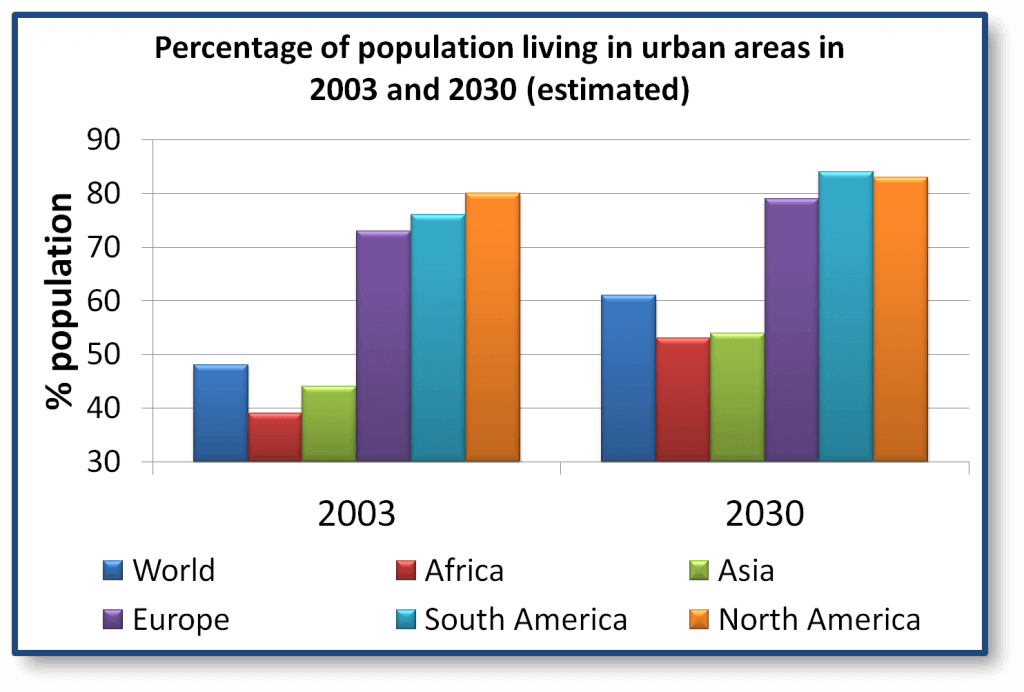 The charts provides [‘chart provides’ – it is only one chart] information about the percentages of population living in rural and urban areas in different areas [be a little more specific – ‘…five different areas…’] and the whole world in 2003 and 2030.

In 2003, 48% of the population was living in urban areas in the whole world as average. The percentages in Africa and Asia were clearly lower than average, standing at 38% and 42% respectively. Meanwhile, the people in other areas, including Europe, South America and North America, were more keen to live in the city [we don’t know if they were keen – their feelings are not given in the graph]. The proportion was between 70-80%. And the North American [don’t start a sentence with And. This could just begin with ‘…North America had…’] had the highest urban population proportion at 80%, roughly double to the percentages of African and Asian.

In 2030, it is estimated that more people will move to city. It will be 59% in average [‘on average’] in the whole world. The increase in Africa and Asia will be dramatical [‘dramatic’] thanks to the relatively low percentages in 2003, which will be [this is a relative clause. It is good grammar, but the ‘which will’ section refers to 2003 as that is what it follows. Of course, this is not correct – it actually relates to 2030. Better would have been ‘…in 2003, rising to 54% and 55% respectively.’] 54% and 55% respectively. Though only little [‘slight’ would be more academic] changes is expected [‘are expected’] in the other 3 areas, they will be [‘are predicted to be’] still higher than the formor [spelling – former] 2 areas, which will be [‘is estimated to be’] between 79-85%. However, the highest proportion of urban population will be [‘is anticipated to be’] found in South America, which is likely to be 85% in 2030.

In conclusion [In conclusion is not the best way to end Task I. In conclusion suggests a balance of opinion, but Task I has no opinions – it is fact. Better would be ‘To sum up’], the city population will increase in the future in all areas in the world, and it is more evident in Africa and Asia.

This report is over 70 words longer than the requirement. The risk of writing so much over the word limit is that more errors are shown to the examiner, and points can be lost for not being coherent and cohesive. The writer needs to use a wider variety of expressions when talking about data. For example, 48% could be described as ‘nearly half’. Showing a range of ways to express the information is important for a high result. It is also important to only write exactly what is shown in the graph – don’t add any personal opinions or value judgements about the graph.

Some of the sentences are a little short, and would have been better combined to create longer, more academic sentences.

The writer uses ‘will’ to refer to the future, whereas the graph indicates that this is only estimated, so ‘will’ is too strong.

However, the report summarises all of the essential information, provides a clear overview of the trends and is written in a suitable academic style.