The chart shows the sources of carbon dioxide emissions between 1970 and 2000. 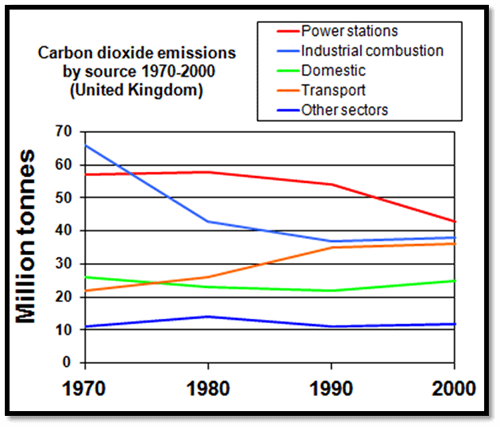 The line graph illustrates the quantity of carbon dioxide released from different sources in UK, ‘the UK’] during ‘from’ – during is used for a single period of time, not as a starting point (e.g. during 1990) 1970 to 2000.

From 1980 to 1990 this needs to be followed by a comma there were changes in all presented sources. Transport and industrial combustion had ’emitted’ or ‘were responsible for’ almost the same quantity at the end of 1990. Power stations account ‘accounted’ for the biggest ‘largest’ would be more academic quantity, releasing almost five times more than other sectors which again over this period of time remained the best releasers a good attempt at rephrasing, but not a common construction – better would be ‘released the least’.

In the meantime this is used for two actions happening at the same time, but this sentence refers to the following decade (1990-2000) so is inappropriate in 1990 to 2000 the trend was the same with the starting year with the only exception that transport took over ‘overtook’ (although ‘exceeded’ would be better) the domestic. While industrial combustion, domestic, transport and other sectors’ carbon dioxide emissions almost levelled off, the power stations figure moderately fell. To conclude To conclude is not the best way to end Task I – it suggests a balance of opinion, but Task I has no opinions – it is fact. Better would be ‘To sum up’, the quantity of carbon dioxide emissions reduced in 2000.

This is a clear and concise description of the graph. There is a good range of grammar and some appropriate vocabulary, although some language is a little too informal (e.g. ‘biggest’).

The closing sentence highlights the main trend well, and the introduction is clear. Most of the important sections of the graph have been highlighted, although the writer could have added that industrial combustion fell the most over the given period.